Schools working together is inspiring, as a group of 30 teachers, administrators and students discovered on May 19. Mosman Public School was host for the second meeting of the Zero Emissions Schools Network — Mosman.  It was a lively and productive discussion. 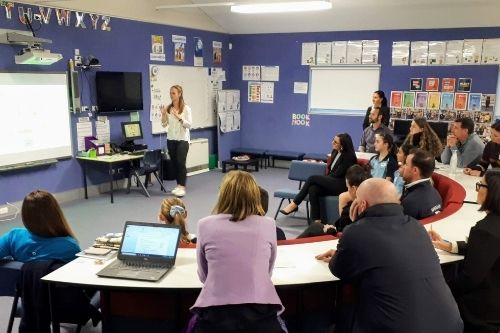 Year 5/6 teacher, Kate Leary, and four members of Mosman Public School’s Sustainability Club, presented on their sustainability initiatives. These include rooftop solar and vegetable beds. Then students from the other schools working together gave updates on their own initiatives.

The range of ideas is inspiring: native bee hives, waste-free lunch days, vertical wall gardens, and auditing electricity usage with the Climate Clever app are just a few of the actions students are taking to reduce emissions. 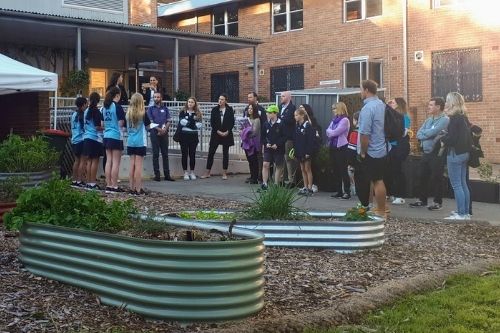 The Zero Emissions Schools Network – Mosman involves all eight schools in Mosman local government area, plus Cammeray Public School in North Sydney.  If you are interested in creating a sustainability group at your school or a Zero Emissions Network in your LGA, the Zero Emissions Sydney North Schools page has a great range of resources to get you started. Jenni is also available for one-on-one consultations and you can contact her via schools@zerosydneynorth.org.au.

Jeremy and Kate live in a Pettit+Sevitt home, designed by Sydney architect Ken Woolley near the start of his career. Their house is on a steep block, surrounded by mature trees. The trees have grown over the years turning harbour views into harbour glimpses, but they like it that way.

We believe that the fact there are trees increases the value of property in Mosman. In a climate change world it reduces temperatures and gives us oxygen and all sorts of good things.

The natural environment has always been important to Kate and Jeremy. They were both involved in the long campaign in the 80s and 90s to prevent Sydney Harbour’s foreshores from being developed, which led to the establishment of the Sydney Harbour Federation Trust in 2001.

The family installed a small rooftop solar system back in 2009 to take advantage of the 60c feed-in tariff. But ten years on, their solar feed-in had dwindled to almost nothing and mature trees put the panels in partial shade for much of the day. Kate and Jeremy wanted a more efficient system but they were determined to keep the trees. After talking to Zero Emissions Sydney North they obtained quotes for a new system and chose Solarpro to install it.

A solution for shady sites

Solarpro recommended installing a 3.7 kW system comprising 10 LG Mono XL panels, using a Solaredge inverter, which could make the most of their tree-shaded, west-facing split level roof. The installation took half a day and cost $5,433, plus $650 for their old panels to be recycled. The new system generates nearly twice as much electricity.

The financial benefits of solar are not Jeremy and Kate’s key motivation, but their new system is already making an impact on their power bills.

Where does their motivation come from?

“From the soles of our boots”, says Kate, “to our heart and souls. We started bush regenerating and got gradually more and more concerned about the environment. We want to do what we can.”

Find out more about Mosman Parks and Bushland here, and investigate how you might benefit from rooftop solar here.

This is the first in a series of case studies carried out on behalf of Mosman Council as part of the Mosman Sustainable Living project.

The energy and enthusiasm was great to see. It was so interesting to hear what every school is doing and find out their motivation for joining the group.

Jenni is launching a regular email newsletter to the group, with news of grants, events and other relevant information. Jenni, Ursula and our team have built an information hub with information, case studies, how-to guides and resources at Zero Emissions Schools. Look out for how-to guides on reducing waste and installing solar.
If you are interested in creating a sustainability group at your school the Zero Emissions Sydney North Schools page has a great range of resources to get you started. Jenni is available for one-on-one consultations and you can contact her via schools@zerosydneynorth.org.au. Councils can also contact us if Council is interested in a Zero Emissions Schools Network for your LGA.