So you’ve switched to renewable energy, you’ve installed solar panels, you’re doing your bit. But what happens when the solar panels reach the end of their useful life. A recent story on ABC suggests that at the moment most solar panels are ending up in landfill. Which is not good.

What’s the solution? Recycling! Ann-Charlott Paduch has been following the recycle trail… 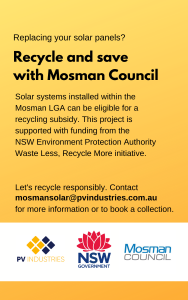 Solar Panels are classified as electronic waste. While they can still be dumped into landfill in most states at the moment, the Federal Government is looking to follow Victoria’s example to introduce mandatory recycling (similar to other e-waste such as computers and TVs).

Other companies leading the recycling charge include:

Reclaim PV is the only dedicated solar panel recycling company in Australia at the moment. They are based in South Australia, but will pick up solar panels from anywhere in Australia for around $30 a panel.

EcoActiv is a Melbourne based company which picks up a range of items including solar panels, at a similar cost to Reclaim PV.

Arnie’s Recon is a Sydney-based social enterprise which will take ‘anything with an electrical cord’, including solar panels, and repair, repurpose or recycle.

Many solar installers, including our solar installation partner, Solarpro, offer a recycling service for your old panels, usually for a small fee.

You can find more details in our Solar Made Simple FAQs, which we regularly update.